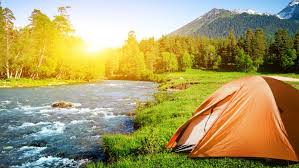 The truest test of friendship?

A thin sheet of nylon. Specifically, one shaped like a tent.

Sometimes, not so much.

My wife, Kellie and I hoped for the former as we headed out the first week of June with two of our dearest friends, Deb and Jay for five days of camping in Michigan’s Lower Peninsula.

For Kellie and me, camping is our default for time away. Until they reached late adolescence, our kids knew no other form of vacation. That was on purpose.  We truly love its simplicity and all that comes (or doesn’t come) with that.

The tree-rustling breeze. The immense quiet. The long walks along the shore of an inland ocean, the waves lapping at your toes. The “forced” obligation to create your own recreation (until the damned Internet infested every corner of the world, including even the deepest deep woods of Michigan’s Upper Peninsula.) The temporarily-close friendships struck with folks with kids the same age as yours. The seemingly-unending daylight crowned by campfires that burn holes into the pitch-black blanket of night. The occasional nocturnal visit by critters and bears. The food that tastes better than anything ever tasted that wasn’t cooked in the open air. Even the sinful mess of S’mores that our daughters couldn’t resist and refused to deny.

But we know camping is not for everyone. For some, those clichés about their idea of camping being “a Holiday Inn without a hair drier” are absolutely true. In fact, I knew  exactly nothing about camping the first time I went with Kellie and her family as a 19-year-old just wanting to spend every waking moment (and more) with my new girlfriend. An east-side Joliet boy, the closest I’d come to camping was sleeping outside under an Army blanket strung over my grandmother’s clothes line on their farm in Herscher. (And, I seem to recall we didn’t last the whole night outside.)

Even then, our first few excursions were inside a small RV crammed with relatives, pets and friends – which is to “camping” what a burger with the kids at McDonald’s is to family dinner. Kind of the same, but not really.

So frankly, we were a little surprised when Deb and Jay – her a camping virgin, him with some nominal experience — accepted our invitation to join us for a week.

(I still think that the invitation was made, and the acceptance given over several-too-many glasses of wine. Still, Your Honor, we gave them many chances to back out, and they didn’t, so…)

To be clear, Kellie and I are years past (and now too old for) sleeping on the ground. Rather, we have evolved to what I call “modified tent camping” complete with high, firm air mattresses and full electric inside the tents to power our phones, IPads and Kellie’s sleep apnea machine. (That last one is important. Kellie can’t breathe without the machine. Plus, you know, it’s easy to confuse a snoring spouse with a rumbling bear.)

Still, when it comes right down to it, only a tent wall (and the occasional tarp when circumstances warrant) stands between us and whatever Mother Nature throws our way.

Unfortunately, for our beloved buddies, Mother was especially bitchy on this, their inaugural excursion.

We arrived around dinner time after six hours on the road. Our site sat near the edge of a high bluff only 200 yards from Lake Michigan. Amid all that late-afternoon glory, we had to set up three tents in winds blowing so hard I thought maybe God was mad at us. And that was just the start.

Being early June, the weather was alternately gorgeous and glum.

Temps dipped into the low fifties and high forties at night – ideal snuggling and sleeping weather if you’re accustomed to and prepared for it. If not, well…that story often ends in blurry-eyed breakfasts. (We gave Jay and Deb an electric heater the next morning which seemed to help a bit.)

The second night, it rained. Again, not usually a crisis, unless one is used to sleeping in totally dry conditions sheltered by layers of drywall.

To preface: we have two spare tents belonging to each of our daughters. They used them individually when they got “too old” to occupy the same space (heaven forbid…only girls…)

One tent is smaller but has a full nylon ceiling and only a couple of windows. The other is bigger, but the entire top half is mesh, making for fabulous ventilation — if the weather is dry. Understandably, being full-grown adults, Deb and Jay favored the extra space and picked the bigger tent.

As all veteran campers do, I’d twice waterproofed all the seams in both our tents and the flies that cover the tents, anticipating the possibility of some precipitation.

Anyway, it rained. Water did what water does, finding a way around the fly and in between the otherwise-waterproofed seams and through the mesh tent ceiling.

Once again, Your Honor, I must give some context: it’s not like it rained “Noah’s Ark” rain (although, situated under a tree and amplified by the nearby lake, it sounded  worse than it really was.)

Still, they got wet.

And we felt terrible. (I put a tarp over their tent the next morning. Of course, it didn’t rain again, and why would it? Mother Nature’d already had her laugh at our expense.)

Then, the penultimate day of the trip was damp and chilly. No other way to say it. Even for Kellie and me who had packed for a wide range of late spring meteorological possibilities. I threw on every piece of clothing I had. No luck. It. Was. Friggin’. Cold.

At Kellie’s welcome suggestion, we day-tripped into town where, strangely, it was twenty degrees warmer. We saw a movie at a charming, volunteer-run local cinema, visited a couple of bookstores (always my favorite part), hit a great winery and had a terrific lunch.

(If Kellie was a closer in baseball – not that she even knows what a closer is –she’d be a ka-trillionaire for all the “Life Saves” she has earned!)

Just to be clear, not every moment was misery.

We had a great time playing mini-golf. Learned Jay has a God-given skill for building award-winning campfires. Enjoyed some wonderful whiskey and wine each night. Took a long, tension-relieving walk along a terrific trail. Laughed even as we shivered through layers of denim and sweatshirts. Pigged out on best bison burgers ever (because they were made over a campfire.) Trekked a great state park that rewarded us with some of the most magnificent views God ever saw fit to paint. Strolled the lake Michigan-soaked streets of a town that put one in mind of coastal Maine, both misty-gray and sunny-blue at the same time. And had some wondrous cherry pie from a restaurant specializing in everything cherry.

Still, by any measure, those five days felt like an eight-day week.

Over our last evening meal, I asked our friends about their impressions of camping.

“Five days might have been too many for the first time,” said Jay, ever the diplomat, his smile silently begged forgiveness for his candor.

Guys being guys – and Jay being an admirably-protective young husband — I knew he was speaking for Deb, who sat across the picnic table, shivering and shrinking into her sweatshirt, turtle-like, searching for every last iota of warmth.

That’s how the trip ended.

The next day, our two-car caravan left together. Kellie and I drove straight home. Jay and Deb veered off to hit a tourist spot, arrived at our house a few hours later, dumped their borrowed camping gear and left as fast as courtesy allowed.

“Oh well,” I thought. “Nothing ventured, nothing gained. At least now we know how they feel about camping.”

Then, this week, Deb posted a picture on Facebook of a ginormous luxury tent that looks like a canvas-covered penthouse suite at the Ritz-Carlton. Her note, addressed to Kellie, me and Jay: “Next camping trip!”

Proving yet again that friendship, strong and real and true, is as thick as a six-foot wide limestone wall.