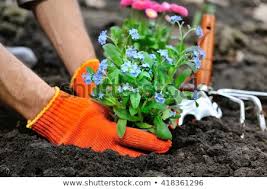 I will plant a flower

to show what I

have learned from your love.

I will push the seed deep

into the warm, dark,

I will feed it, nurture it

to coax its fragile stem

from its protective shell.

I will open spring’s window

to help the bud find the

I will muddy my knees

to remove all that

would choke its growth.

I will gently pluck away

to let out the new.

I will do everything I can to

help this flower find and

I will sing only of its beauty,

and never blocking its sunlight.

I will cherish this flower

then give it to you,

a treasure from my heart to yours.

I will, for I have learned that

and sustain life, but only love.

So, what’s so “good” about Good Friday?

It’s one of the most common, confusing, frustrating and foundational questions in Christianity.

After all, this is the day when the man called Jesus died as an enemy of the Roman state. A common criminal. A political agitator and potential adversary.

Though not unexpected — Jesus himself predicted his coming death — his crucifixion was nonetheless terrifying and heartbreaking to his followers.

More than that, it was embarrassing.

After all, some of them had invested years of their lives in this man. They knew him as a powerful leader. A brilliant, if somewhat radical teacher. Possibly, a king and savior, even. They’d seen him leading a world-changing political, religious and social movement (perhaps with one or two of them maybe sitting at his side and wielding some of his authority.)

Yet, now, they could only see his brutalized body hanging from a bloody cross.

What had happened? What had gone wrong?

Faith shows us that the movement did indeed happen. And the world did change.

For out of Jesus’ horrible death came eternal life.

A mere moment in time redefined Time itself.

And the angry screams of hatred became the soothing whispers of love.

We just have to be brave enough to listen, closely, with both ears and hearts.

Yes, Lord, I hear you

calling me to the foot of your cross

I love you, I want to carry your burden

but I see your pain–

The salty tears in your eyes

The rancid smell of your dying

The slivers buried deep in your palms

The shame of your broken nakedness

–And I am a sparrow in a storm

Yes, my child, I know your fear

It bows my back and stills my spirit

Yet, where else but at the foot of my cross

Can you be close enough–

To feel the soulless metal that stole my life

To see the gnarled wood through my wounds

to kneel in the dirt,

moist with my sweat and tears and blood

–To know, truly, finally what I did for you?

Where else, but here, at the heel of my suffering

Are you close enough for me to touch and hold you,

And whisper, so softly that only your heart will hear,